Out of all the worthy resolutions floating around in my head, there’s only one I really plan to stick to.

Don’t get me wrong. I haven’t navigated my way through 2013 fabricating events for the sake of social media. I haven’t, oh I don’t know, say, pretended to know sign language and made shit up during the funeral of one of the greatest men that ever lived.  What. The. What?

But what I have done plenty of times – in fact more often than not – is lied by omission. I’ve habitually curated my life on social media so that it played more like a Greatest Hits album, a highlights reel chock full of ponies and rainbows and Brady Bunch moments.

Look at us out to dinner!

Here I am with my children baking!

Here’s a great review of my book!

Here I am with my children baking!

Best husband in the world!

And while all those moments were bonafide, they don’t tell the full story.  Because like you and every other SINGLE PERSON ON THIS PLANET (except maybe Beyonce) I’ve also had down days. I’ve stuffed up. Screwed up. Been fed up. I’ve had disappointments and blah moments and had things blow up in my face big time.

But you wouldn’t know it.

Because here I am baking!!!  Ahem… 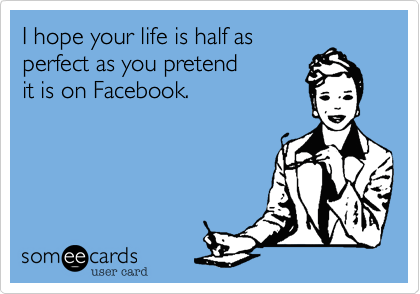 Because we all know that ain’t the case.

So the Facebook status updates you never saw this year should have included:

My work colleagues are in Melbourne shooting a video and I’m at home feeling envious, picking spaghetti off the dog’s head and watching my toddler have a meltdown because I offered him a second slice of apple.

Went out to dinner with Brad. Had enormous argument about “Who is the most tired?” Didn’t speak a word for the rest of the evening except to ask for the WORLD’S LARGEST GIN.

I just found and ate chocolate freckles for breakfast. #fail

Four-year-old just said: “You never spend time with me.”  Part of me wants to cry. The other part wants to go to my union with photographic evidence of 1000 hours spent playing HAIR SALON.

I’m having one of those days when I don’t know what the hell I’m doing with my life.

But who wants to mention that real stuff? I mean, it’s boring and depressing, right? RIGHT?

Better to treat Facebook like a never-ending sales conference where the job is to convince everyone else we’re dizzy with happiness and success.

At least that’s clearly what I was telling myself until TWO dear friends of mine separately opened up to me about the year they’ve had.

Each admitted they were struggling with bouts of depression and had been in a black hole.  To say I was shocked is an understatement.

“But you seemed so happy on Facebook!”  I said to each of them.

And you know what they both said? 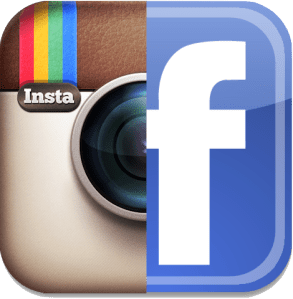 Why do we treat social media as an enormous PR campaign for our lives?

They each looked at me as though I had rocks in my head and said, “Oh come on, you can’t believe what’s on Facebook”.

How did we get to this point, people?  When did we all think we needed to treat Facebook like an enormous PR campaign for our lives?

You see that’s the thing with social media … by curating our lives like a resume – by editing out the dud moments, the stuff ups, the pear-shaped days – we’re creating a two-fold problem:

1. By pretending our lives are PERFECT we paint ourselves into a corner.  It becomes harder and harder to admit that the version of our lives we’re ‘promoting’ is not the one we’re living and it can stop us from reaching out for help – to our friends, family or even to take the steps we need for professional help. So we just feel like big ol’ frauds but feel like we can’t reach out to anyone and say our lives are total crappola at the moment.

2. The other problem of course is that if so many of us are just continually fake smiling our way through Facebook, it can lead other people to thinking they are alone – alone in having a bad parenting day (or month, or, er, year). Alone in sometimes hating their job, or feeling blah about what they’re studying or being single or married or whatever.

Telling the truth is scary, I get that. But it’s liberating too … and it’s often when we admit to a screw up or a bad day that deeper connections are made with our family and friends.

So this year I intend to tell the truth on Facebook. To remind everyone who knows me that I’m not superwoman, that I don’t live a perfect life or get things right all the time. After all, a highlights reel is always so much better when the bloopers are thrown in.