At 30 I had a very clear definition of success. At 42 I threw that definition in the bin.

I made the two-hour drive south to see my parents last weekend and on my bed, waiting for me, my mum had placed an old cardboard box sealed with yellowed, crackly tape.

Look what I found, she said with a smile in her voice.

My teenage self resided inside that box. I winced.

As I pulled the tape away I was about to attend a school reunion, for one.

There were my report cards. Yearbooks full of corkscrew perms and braces and hyper-colour t-shirts. My year 12 formal ticket. My old favourite floral scrunchie that had lost its will to live. My McDonald’s Party Hostess of the Year badge.  Phil Collins “Not Jacket Required” on cassette. And a small crumpled pink envelope with ‘For The Future’  on the front.

You see, when I was 17, I’d had a very clear definition of what a successful life looked liked.

I would be able to play Jessica’s Theme (from the Man From Snowy River) on the piano. I’d be able to waltz around a dance floor; have travelled to New York, Paris and Rome.

I’d be working as either a children’s TV host, a travel writer or a magazine editor.

Had at least one feature article published in a newspaper or magazine.

And I’d be married to a man who made me go weak at the knees. Or Kirk Cameron. One or the other.

Achieve that and I’d be a success.

By the time I was 30 I dug out that list and crossed off most – not all – of those goals. I’d walked the streets of New York, Paris and Rome. Worked as a magazine editor and a travel writer. Had a column published in the newspaper.  Filled my Wednesday nights with a dance class. And married a man who made me weak at the knees  … most notably when he walked out.

But I was still driving a second-hand 1992 Hyundai sedan with no air con; I’d nicknamed her Meg Ryan (because they’d had the same amount of work done).  And as for Jessica’s Theme? After two years of piano lessons the only thing I could play was ‘Happy Frog’.

My friends thought I was living the dream. But I didn’t feel successful yet, so I started a new list.

You see, when I was 30, I had a very clear definition of what a successful life looked like.

I’d be the author of a best-selling novel.

I’d be working as a newspaper columnist or TV scriptwriter and living in a Hamptons style house with a garden full of fairy lights.

I’d be married (err, again) to a wonderful man and have at least two kids.

Tick all that off and then THEN I’d be a success.

By the time I’d turned 40, I’d achieved everything on that list. I’d met and married a wonderful man. Had a tribe of much-cherished kids. And while our home wasn’t a Hamptons style mansion, my fairy lights twinkling on our veranda made me smile. 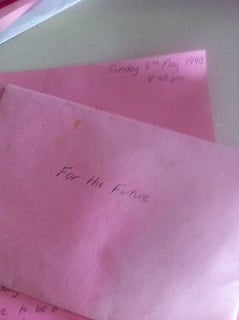 I ticked off everything from the envelope, and yet that feeling of being ‘successful’ never came.

And yet, that feeling of being ‘successful’ never came.

I remember looking in the mirror the year I turned 40 and thinking, “I thought it would be different to this? I thought by this point I’d feel like a success. I thought that list of goals would bring me more joy.” Instead it felt hollow.

And that’s when I realised I needed to discover my own definition of success. Because for me it wasn’t about the big-ticket items. The job title or the car or the house with the white picket fence.

For me, success was measured by how I was feeling.

At 42, success is feeling like I am significant in my community; knowing that one person on this planet breathes easier every year because I am here.

At 42, success is cultivating joy – taking friendships offline and onto my front veranda and seeing a friend’s eyes sparkle when they give me their status update in real life.

At 42, success is being part of a tribe – spending time with a cherry-picked family and friends who fill me up and nourish my soul and who accept and love me as my imperfect, messy self.

Today success is discovering that happiness is found in the small moments, the tiny triumphs as much – maybe more than – the big ones.

Tying your laces on your runners and going for that first walk in forever.

So that teenage girl that resides in the cardboard box, I’m happy she’s there with her big dreams (and her big hair) and her to-achieve list.

Because all of that lead me here to where I am now as I write this post. On a veranda hemmed with fairy lights, a cup of tea and six chapters left of Madame Bovary.
This post first appeared on Mamamia.