Tara Brown, you nailed it.

You bloody nailed it.

That’s what I wanted to say last night when I watched Tara Brown conduct one of the most horrific and disturbing interviews I’ve ever seen on television.  I am of course talking about the interview on Sixty Minutes with David and Wendy Farnell – otherwise known as Baby Gammy’s biological parents.

I think every Australian wanted answers as to how any parent could abandon their child overseas – to an impoverished Thai surrogate, no less. Australians wanted answers too, to claims of child sex convictions, paedophilia, jail time for those crimes.

And Tara got those answers for us.

Make no mistake it wasn’t an easy interview to watch. But Tara made the unwatchable watchable as she calmly, systematically dismantled the arguments put forth. 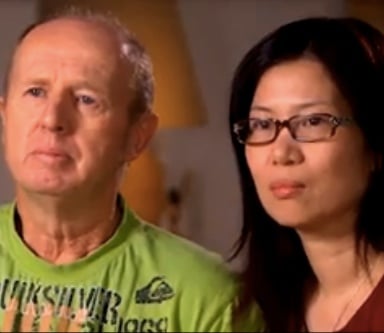 DAVID FARNELL: Well, I’ve been convicted of, yeah, child sex offences, and I hang my head in shame for that. And I am deeply regretful for that. And I’m so, so sorry to those people.

TARA BROWN: And it wasn’t just one, was it?

TARA BROWN: I mean, it is people.

TARA BROWN: Many people that you have to apologise to.

DAVID FARNELL: Yeah, OK. So yeah, I was convicted and I went to jail. And when I got out of jail I thought, “Well, I can run and hide and change my name and move to another town.” But I thought, “No, I need to face everybody and I can say, yes, I’m taking responsibility for what I did.” So I stayed, I stayed in Bunbury. I copped abuse, I copped a lot of horrible things, but I stayed there and I faced it. And I said that I will continue until I can hold my head up high again. And I think that I have done that.

TARA BROWN: When did you learn to be remorseful? Because the judge at the time said that you showed no remorse and that through counselling you tried to minimise your crime. When did it hit you that you actually did do the wrong thing?

DAVID FARNELL: I think just seeing my children and thinking that if somebody did that to my children I would be devastated.

TARA BROWN: But you had children when you did it, didn’t you? Those questions are easy to ask from the safety of your couch at home but in front of people who are teary or acting remorseful (be it a sham or not) it can be tougher to stay on course. To not let them off the hook.

But Tara Brown brought her A-game last night. She was fierce, she was unrelenting and she wasn’t going home until she had the answers every Australian has asked themselves over the past few weeks since this story broke.

And it got me thinking last night. When I was growing up and talk turned to the amazing achievements of female journalists … Jana (Wendt) and Ita (Buttrose) always headed the list but then there’d be a pause and names like Barbara Walters and Diane Sawyer and Oprah Winfrey took over. We had to sort of look outside of Australia for big names in terms of female journalism.

And in a world where we leap on screw ups and so rarely offer a pat on the back  – I’m giving one to Tara Brown. Consider this a thank you. From one viewer.  Love your work.